One of the most common causes of action filed in California Courts is Breach of Contract.  “A contract is an agreement to do or not to do a certain thing.” (California Civil Code §1549). A contract can be either written or oral “except such as are specially required by statute to be in writing.” (California Civil Code §1622).  Breach of Contract claims are very different from those in Tort like Negligence or Battery.  Our California Supreme Court distinguished the difference saying, “[c]ontract and tort are different branches of law. Contract law exists to enforce legally binding agreements between parties; tort law is designed to vindicate social policy.” (Applied Equipment Corp. v. Litton Saudi Arabia Ltd., (1994) 7 Cal.4th 503, 514).  For a Plaintiff asserting a Breach of Contract claim to prove their case, they must first prove that a contract has indeed been formed.

The California Civil Code says that “[i]t is essential to the existence of a contract that there should be: 1. Parties capable of contracting; 2. Their consent; 3. A lawful object; and 4. A sufficient cause or consideration.” (California Civil Code §1550).  Put another way, Plaintiff must show “1. That the contract terms were clear enough that the parties could understand what each was required to do; 2. That the parties agreed to give each other something of value; and 3. That the parties agreed to the terms of the contract.” (CACI-2017 No. 302).

Not everyone is capable of entering into a contract.  California Civil Code §1556 states, “[a]ll persons are capable of contracting, except minors, persons of unsounds mind, and persons deprived of civil rights.”

Consent is almost always determined by the conveyance of an offer by one party and the acceptance of another party.  An offer is “the manifestation of willingness to enter into a bargain, so made to justify another person in understanding that his assent to that bargain is invited and will conclude it.”  (City of Moorpark v. Moorpark Unified School Dist., (1991) 54 Cal.3d 921, 930).  “[A]n offer must be sufficiently definite, or must call for such definite terms in the acceptance that the performance promised is reasonably certain.” (Ladas v. California State Automobile Assn., (1993) 19 Cal.App.4th 761, 770).  So, it must be proven that the Plaintiff “communicated to [the defendant] that he/she/it was willing to enter into a contract…that the communication contained specific terms…and that base on the communication, defendant could have reasonably concluded that a contract with these terms would result if …accepted.” (CACI-2017 No. 307).

Plaintiff must also prove acceptance.  “Acceptance of an offer, which may be manifested by conduct as well as by words, must be expressed or communicated by the offeree to the offeror.” (Russell v. Union Oil Co., (1970) 7 Cal.App.3d 110, 114).  So, Plaintiff must prove “that [the defendant] agreed to be bound by the terms of the offer… and that [the defendant] communicated his/her/its agreement to [Plaintiff].” (CACI-2017 No. 309).  Once there has been an offer and an acceptance then there is consent.

“California statutes require that a contract have ‘a lawful object.’ Otherwise the contract is void.” (Kashiani v. Tsann Kuen China Enterprise Co., (2004) 118 Cal.App.4th 531, 541).  Indeed, “All contracts which have for their object, directly or indirectly, to exempt any one from responsibility for his own fraud, or willful injury to the person or property of another, or violation of law, whether willful or negligent, are against the policy of the law.” (California Civil Code §1668).   Unlawful is “Contrary to an express provision of law; 2. Contrary to the policy of express law, though not expressly prohibited; or, 3. Otherwise contrary to good morals.” (Kashiani v. Tsann Kuen China Enterprise Co., (2004) 118 Cal.App.4th 531, 541; citing California Civil Code §1667).  If a contract does not have a lawful object it is not a contract at all.

“[T]here is a statutory presumption that a written contract is supported by a good and sufficient consideration. This presumption is disputable, but the burden of showing want of consideration lies with the parties seeking to invalidate or avoid the instrument. The presumption is itself evidence and the introduction of evidence showing want of consideration raises an issue of fact and it is for the trier of fact to determine whether evidence offered to overcome the presumption   is sufficient.” (Blonder v. Gentile, (1957) 149 Cal.App.2d 869, 874).  “A consideration is sufficient to support a contract if it is either beneficial to the promisor or detrimental to the promisee and the surrendering or foregoing of a legal right constitutes a sufficient consideration for a contract if the minds of the parties meet on the relinquishment of the right as a consideration. (Id. at 869).  In fact, “[a]ny benefit conferred, or agreed to be conferred, upon the promisor, by any other person, to which the promisor is not lawfully entitled, or any prejudice suffered, or agreed to be suffered, by such person, other than such as he is at the time of consent lawfully bound to suffer, as an inducement to the promisor, is a good consideration for a promise.” (California Civil Code §1605).  It seems the only limitation on what is consideration is it “must be lawful…” (California Civil Code §1607).

It is true that contracts can be oral.  However, there are some contracts that must be in writing.  California Civil Code §1624 states, “[t]he following contracts are invalid, unless they, or some note or memorandum thereof, are in writing and subscribed by the party to be charged or by the party’s agent: (1) An agreement that by its terms is not to be performed within a year from the making thereof. (2) A special promise to answer for the debt, default, or miscarriage of another, except in the cases provided for in Section 2794.

What is a Breach of Contract?

If you find yourself being sued for Breach of Contract all is not lost.  There are defenses you can assert.  Of course, one defense is to be able to disprove one essential element of the cause of action.  Aside from that, there are also affirmative defenses that can be raised.

“Mistake of fact is a mistake, not caused by the neglect of a legal duty on the part of the person making the mistake, and consisting in: 1. An unconscious ignorance or forgetfulness of a fact past or present, material to the contract; or, 2. Belief in the present existence of a thing material to the contract, which does not exist, or in the past existence of such a thing, which has not existed.” (California Civil Code §1577).  “However, such a unilateral mistake may not invalidate a contract without a showing that the other party to the contract was aware of the mistaken belief and unfairly utilized that mistaken belief in a manner enabling him to take advantage of the other party.” (Meyer v. Benko, (1976) 55 Cal.App.3d 937, 944).  If a defendant can show 1. that they were mistaken about a fact, 2. that the plaintiff knew about the mistake and used it to their advantage, 3. that defendant was not excessively careless, and 4. that defendant would not have agreed if they had known about the mistake then the contract is deemed to have never been created. (See CACI-2017 No. 330).

The only difference between Bilateral Mistake and Unilateral Mistake is that both parties were mistaken about a material fact.  Although a defendant does not have to show they were excessively careless for bilateral mistake, they must still show that they would not have agreed to enter into the contract had they known about the mistake.

California Civil Code §1569 states that “[d]uress consists of any of the following: (a) Unlawful confinement of the person of the party, or of the spouse of such party, or of an ancestor, descendant, or adopted child of such party or spouse. (b) Unlawful detention of the property of any such person. (c) Confinement of such person, lawful in form, but fraudulently obtained, or fraudulently made unjustly harassing or oppressive.”  California Civil Code §1570 defines menace as “injury to the character of any person.” “Under the modern rule, ‘[d]uress, which includes whatever destroys one’s free agency and constrains [her] to do what is against [her] will, may be exercised by threats, importunity or any species of mental coercion.  It is shown where a party ‘intentionally used threats or pressure to induce action or nonaction to the other party’s detriment.’” (In re Marriage of Baltins, (1989) 212 Cal.App.3d 66, 84).  If a defendant can show that 1. plaintiff used a wrongful act or wrongful threat to pressure agreement to a contract, 2. that the defendant was so afraid or intimidated they had no free will to refuse to consent, and 3. That they would not have consented without the wrongful act or threat then the contract will be deemed to have never been formed.  (See CACI-2017 No. 332).

“The doctrine of ‘economic duress’ can apply when one party has done a wrongful act which is sufficiently coercive to cause a reasonably prudent person, faced with no reasonable alternative, to agree to an unfavorable contract. The party subjected to the coercive act, and having no reasonable alternative, can then plead ‘economic duress’ to avoid the contract.” (CrossTalk Productions, Inc. v. Jacobson, (1998) 65 Cal.App.4th 631, 644).  If it can be shown that the plaintiff used a wrongful act or threat to pressure consent, that a reasonable person in the same position as the defendant would have believed they had no reasonable alternative except to consent and that the defendant would not have consented without the wrongful act or threat then the contract is deemed to have never been created.  (See CACI-2017 No. 333).

“Undue influence consists: 1. In the use, by one in whom a confidence is reposed by another, or who holds a real or apparent authority over him, of such confidence or authority for the purpose of obtaining an unfair advantage over him; 2. In taking an unfair advantage of another’s weakness of mind; or, 3. In taking a grossly oppressive and unfair advantage of another’s necessities or distress.” (California Civil Code §1575).  The court describes undue influence as “’persuasion which tends to be coercive in nature, persuasion which overcomes the will without convincing the judgment. ‘The hallmark of such persuasion,’ said the court, ‘is high pressure, a pressure which works on mental, moral, or emotional weakness to such an extent that it approaches the boundaries of coercion. In this sense, undue influence has been called overpersuasion.’  In essence, undue influence consists of the use of excessive pressure by a dominant person over a servient person resulting in the apparent will of the servient person being in fact the will of the dominant person.” (Keithley v. Civil Service Bd., (1970) 11 Cal.App.3d 443, 451).  If undue influence is proven then no contract has been created

The time period for which a plaintiff may being a lawsuit for breach of contract will depend on whether the contract is written or oral.  California Code of Civil Procedure §337 states that “an action upon any contract, obligation or liability founded upon an instrument in writing” is four years.  However, “an action upon a contract, obligation or liability not founded upon an instrument of writing” is two years. (California Code of Civil Procedure §339).  It is important to know however that “California courts have permitted contracting parties to modify the length of the otherwise applicable California statute of limitations…” (Hambrecht & Quist Venture Partners v. Am. Medical Internat., (1995) 38 Cal.App.4th 1532, 1547).  “A contract cause of action does not accrue until the contract has been breached.” (Spear v. Cal. State Automobile Ass’n, (1992) 2 Cal.4th 1035, 1547). 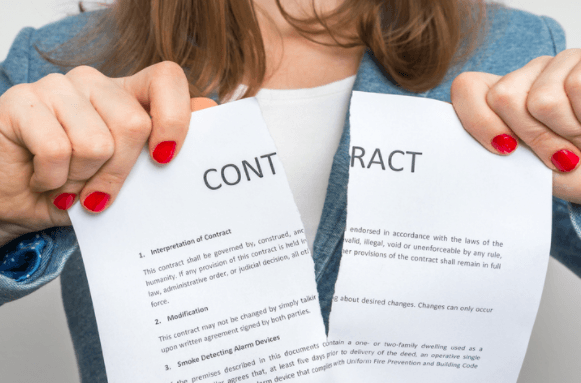 Obviously, contract law is very complicated.  If sued for breach of contract, you need to get in front of the lawsuit as fast as you can.  You will need a lawyer and a law firm that understands the law and a track record of success.  Here at Fitzgerald & Campbell, APLC we understand the law, and we know how to fight cases in and out of Court.  We can provide you with the defense you deserve.

William Campbell is a partner at the law firm of Fitzgerald & Campbell, APLC. This is a firm that focuses on debt relief for consumers/small business in the state of California. They assist with all types of debt, including student loan debt. Mr. Campbell can be reached at wcampbell@fclawoffice.com, (844) 431-3851, or at the firm’s website: www.debtorprotectors.com.